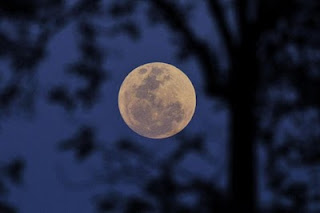 OTHELLO
It is the very error of the moon;
She comes more nearer earth than she was wont,
And makes men mad.

You can find something in Shakespeare for every occasion. Unlike the "birthers" who don't think President Obama was born in the U.S., or the doubters who don't think men have actually walked on the moon, I'm a believer that he was and they did. And also that the Bard wrote his own stuff, hardworking theater guy that he was.

I'm sorry that this photo of "supermoon" isn't mine; I cribbed it from an online Indian newspaper. My little Canon Powershot just couldn't deliver the goods this evening. I walked down to the end of East 52nd Street (where Garbo used to live, BTW) and joined a few other moongazers, a couple of whom were also trying for shots. Two families brought little children to see the phenomenon of a larger-than-usual full moon at its perigee, something that occurs only once every few years. A clear Manhattan night helped to make this view of la luna right over the landmark Pepsi-Cola sign on the East River especially memorable.

It's easier to worship the moon than it is the sun, because you can look right at the moon without damaging your eyes. And this one is certainly worth a long look.