A Capraesque Moment or Two in Trafalgar Square 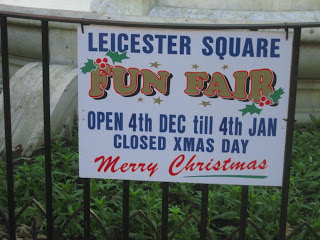 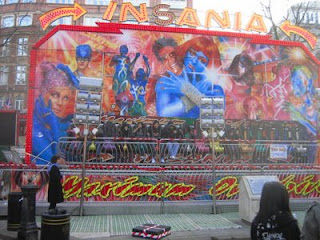 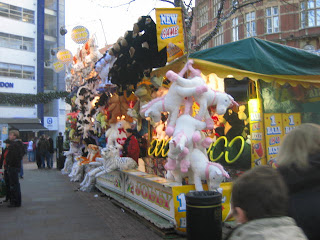 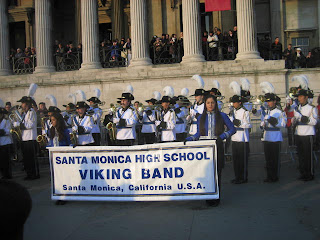 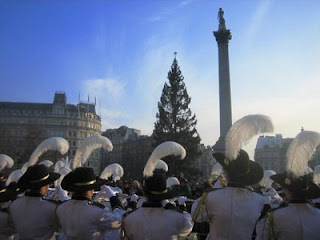 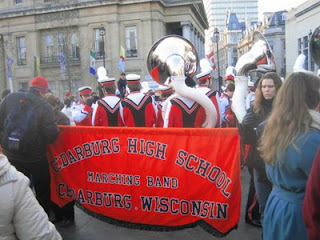 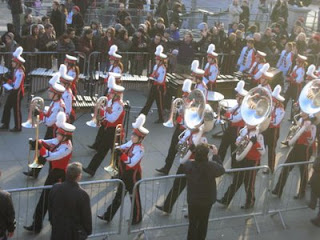 The Mobile Manhattanite is more mobile than usual this holiday season, spending a couple of weeks in London. Yesterday, passing through tourist-clogged Leicester Square and helpfully taking some photos at the requests of two sets of appreciative Japanese teenagers, I was delighted to see the square's annual holiday fun fair in full swing.
Later, on the way to the National Gallery, I heard martial music and saw, over the heads of a moderately large crowd in Trafalgar Square, some white plumes on black Stetsons. Drawing closer, I heard strains of a Beatles song and then saw the spiffily garbed members of the Santa Monica High School Vikings Marching Band, visiting from California to take part in the London Parade for the New Year. Nearby, waiting in the wings, so to speak, was the Cedarburg, Wisconsin High School Marching Band, resplendent in black and orange. The two bands represented, for me, an America of a more innocent time. Maybe this America still exists, to some extent. The Cedarburg contingent later got their chance with, after an extended percussion flourish, a rather stately rendering of "St. Louis Blues." Perhaps I had to come to London to be reminded of this Capraesque vision of the U.S.A. For these kids it may still be A Wonderful Life, at least for a while. Afterwards, the splendors of the National Gallery provided a true contrast. Is this what the pundits mean by the "culture wars"? 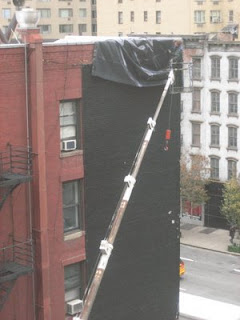 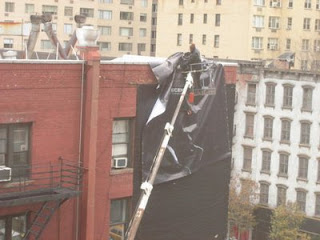 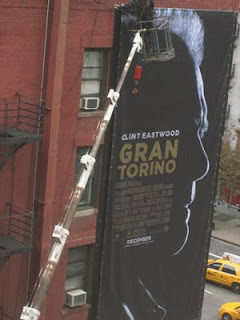 Had always idly wondered about the super-smooth artwork on those ads plastered on the sides of NYC buildings. How exactly does it get there? There happens to be a space right across the street from me, just over the East River Deli, where various ads, mostly for movies, have appeared over the years.  This morning I happened to be looking out of the window and had my question answered: How do they get those nice-looking pictures up? A hard-working guy in a cherry picker is the answer. Here's the latest, for the newest Clint Eastwood opus, Gran Torino. Guess it must be about cars! Duh.
Speaking of American Icon Eastwood, I remember that a former colleague's Spanish-born ex-husband (note how everything seems to be in the past), whose English was otherwise excellent, just couldn't get this star's name right at first, referring to him as "East Cleentswood."
Update: Apparently a car does figure in the film, which just received excellent reviews BTW, but it's really about a bigot learning to tolerate immigrant neighbors. Haven't seen it yet.
Posted by Doris at 7:26 AM No comments:

Labels: The Progress of "Gran Torino" 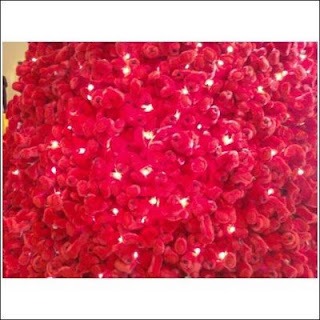 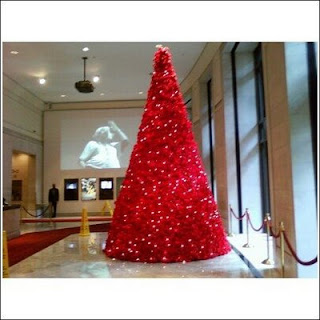 O.K., the season that 'tis has arrived again. The forced gaiety can be oppressive. It's handy to be Jewish at Christmas, as one can safely ignore a lot of the pressure, although they've inflated Chanukah to an alarming degree. And the Feast of Lights lasts eight days, yet. Well, anyway....
However, I'm happy to see that the venerable advertising agency Ogilvy and Mather has once again delighted those of us who discovered its teddy-bear Christmas tree. It's on a comparatively obscure block of West 49th Street between Eighth and Ninth Avenues, as well as being located slightly off the street. Found it two years ago, and the bears were red. Last year they decided to make it with black-and-white pandas which, while attractive, couldn't compete with the red teddies. So I'm glad to see that they're back to Square One this year.
A couple of years ago, someone thoughtfully videoed the tree for YouTube: