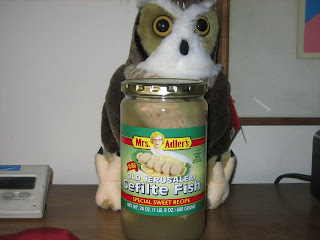 Owing to some ongoing dental work, I’m temporarily obliged to seek out mushy—or, as I somehow prefer to pronounce it—“mooshy” food until the implant is completed. It occurred to me that gefilte fish, which I enjoy from time to time but actually seldom eat, would be an acceptable choice, being suitably mooshy.

The selection today at my local Food Emporium was not vast: no Rokeach, Mother’s, or Manischewitz, e.g., but only Mrs. Adler’s Old Jerusalem. So, Mrs. Adler made it into my shopping cart. Shortly thereafter, I was accosted by a short, gravel-voiced woman straight out of NYC central casting, who screeched, “Where’d ya find the gefilte fish?” I informed her, and then she asked, “What kind?” I showed her, and she replied, “Oh, Mrs. Adler—I like the other kind.” She didn’t say which this was.

This incident reminded me of the wonderful moment in Woody Allen’s Bananas, where Woody brings the bakery box, correctly tied up with string, as a house gift to the Latin American dictator, played by the immortal Carlos “El Exigente” Montalban. The dictator looks inside and says, not batting an eyelash, “Oh, this is prunes; I like cherries.”

I then made the near-fatal mistake of mentioning my reason for buying gefilte fish, and our New York heroine assured me that once I tasted it I would “get to like it.” She then said that my teeth looked beautiful as they were.