Staplers! Or, My Mini-Collection 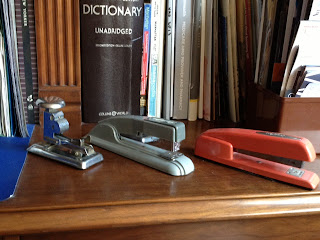 A co-worker at my last job and I had both loved the movie Office Space (1999), and one day I found that she had bought me a gift, even though it was neither my birthday nor a holiday. It turned out to be a red Swingline stapler, immortalized in the movie to such an extent that Swingline started manufacturing red staplers again. Then, this item appeared in the business section of today's New York Times, sparking nostalgia and causing me to e-mail the article to my former office mate:

Among various family objects I've inherited over the years is this Ace Cadet stapler, which could date anywhere from the 1930s through the 1950s. In my case, it's probably from either the 30s or the 40s. Maybe it's even worth something to a collector; people collect old typewriters and cameras, though I don't see why. Swingline is probably eternally grateful to the producers of Office Space. To quote a famous line from Death of a Salesman, "Business is definitely business." I'm not that hard up to try to sell it on eBay, though I've already discovered a site for antique staplers, which shows one like this.

Well, maybe I'll entertain bids, if anyone actually reads this! 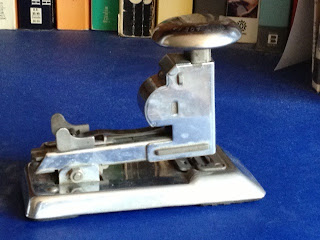 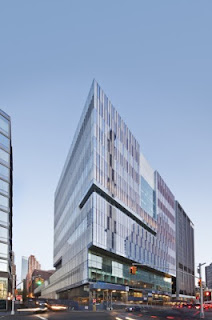 CUNY's well-regarded John Jay College of Criminal Justice recently added an impressive new structure on Eleventh Avenue (which subsequently becomes West End Avenue) as an addition to its campus. Passing by it frequently on the M57 bus, I have become aware that it does double duty on more than one occasion. From time to time, the building has its name changed. A couple of weeks back, in large, neat, permanent-appearing letters, it was called "ALL SAINTS HOSPITAL." And just today, its name had been changed to "BOOKER UNIVERSITY." Underneath the Booker name was "University Hospital." Most intriguing. A quick check on Google (delightfully, the relatively new voice-activated Google app on my iPhone), showed that, apparently, there is no such university. And there doesn't seem to be an All Saints Hospital in New York City, either.

My keen intelligence, honed by endless viewings of the now-defunct, but still ubiquitous, Law and Order (where Lt. Van Buren and others were John Jay alumni), allowed me to posit that they are using John Jay's handsome western façade as a location indicator for one or another TV shows, most probably police and/or medical dramas. I'll have to look sharp to see if I can catch it on the small screen one of these days.

Update! Further research reveals that "All Saints Hospital" is the workplace of Edie Falco, the eponymous protagonist of the show Nurse Jackie on Showtime. O.K., that mystery solved. Now, where is "Booker University"?
Posted by Doris at 11:34 AM No comments: