Who Tawks Good These Days? 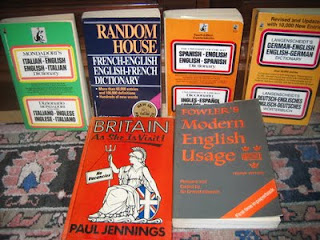 Until recently—and maybe still—there was nothing funnier to the British than the mangling of the English language by “bloody foreigners.” I even have a gift book entitled Britain As She Is Visit, which, I confess, I once found reasonably hilarious. Now I find it merely xenophobic. And as a former English teacher and, now, editor, I can’t help noticing various linguistic gaffes, since it’s my business to do so. A favorite of the recent past was a menu poster in front of a luncheonette near my office, reading “Soup of the Day—Leak.” So, we Yanks can be pretty amused by these mistakes as well. But the time has come to be somewhat politically correct in these matters. After all, how many of us really speak a second, or third, or fourth, language truly fluently—“as she should be spoke”? If our vis-à-vis gets the meaning across somehow, that has to be sufficient in many cases.

Multiculturalism in both Britain and America—to name the most populous Anglophone countries—has to make us more tolerant of imperfect English, at least in everyday use. This does not discount the fact that for professional and literary purposes correct English is an absolute requirement. But this can be outsourced, or learned as needed. The only time I, who pride myself on being able to understand most foreign accents, was defeated occurred during an attempt to make a minor change in my telephone service and, of course, got someone in India. Totally unable to understand my phone contact there, I gave up and to this day continue to pay a small monthly sum for a service I never use. You can’t win ‘em all.

Privately, I still agree with Professor Higgins, but for day-to-day life, I’ll have to listen carefully and interpret as best I can. And this even applies to supposedly native speakers these days!