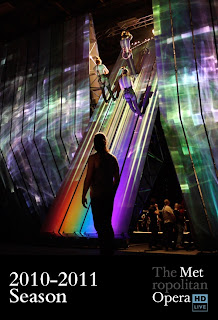 Overactive imagination at work again: Sat down to enjoy Das Rheingold at the Met the other night, and noticed that an elderly gentlemen a few seats to my right was already asleep. I had always supposed that, at least, people waited until the opera actually started before they dropped off. O.K., he wasn’t bothering me and he wasn’t even snoring.

Shortly after the show started, I noticed that another man, just to my left, was bent far over, also apparently asleep as well. I was afraid that he would fall against me, but that didn’t happen.  As the excellent performance progressed, I noticed that he wasn’t waking up. Was he dead? Immediately, ominous thoughts of summoning an usher who would call for an EMT flooded my mind. Would I have to stay around and be a witness? He had come to the opera alone. Would I have to do the Good Samaritan thing? I trusted that the applause at the end would wake him up first.

Of course, he wasn’t dead at all and even stirred a few times during Rheingold’s two and one-half hours. He fled as soon as the curtain came down. I wonder if he remembered anything of the very fine performance. Even the Met’s infamous Robert Lepage Machine, much despised by the critics, made very little noise. There were only a few slight rumbles as the Rhine maidens descended into the deep at the end of their scene. The audience, except for the two snoozers, responded with vociferous appreciation at the opera's conclusion.