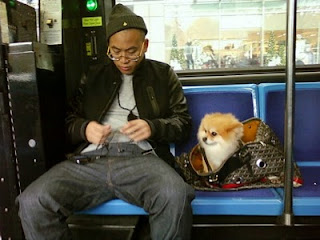 After an unpleasant transit experience—O.K., my wallet was recently stolen on the uptown #6 train—it was pleasant to encounter this little fellow on the downtown 104 Broadway bus. He was inquisitive, and very quiet until I started to get off at my stop. Then he let loose with the kind of yapping that only the smallest dogs seem capable of. I guess he resented the fact that someone, though not his master, was deserting him. For the record, this was "Change," a five-year-old Pomeranian.
P.S.: So far no identity theft re the wallet. And all credit and bank cards have now been replaced. I was the victim of a classic "light-fingered-Louie" on a very crowded train. Lesson learned.
Posted by Doris at 9:45 AM No comments:

Labels: "Change" and his master in transit

Meleagris Gallopavo, to You! 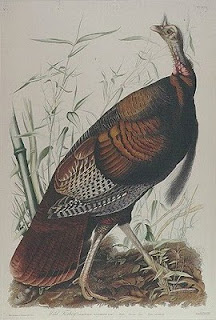 With the approach of Thanksgiving, one can’t help having turkey come to mind. Though the golden-bronze roasted bird surrounded by all of its traditional accompaniments certainly looks appetizing on the festive platter, in actual fact—dare I commit such sacrilege to print?—the bird is pretty tasteless in and of itself. This also puts me in mind of the celebrated Wild Turkey painting by John James (né Jean-Jacques) Audubon, an American pioneer whom I revere, not only for his naturalist artwork but also for his picaresque life. As a kid, I received a large-format edition of his Birds of America, which I am proud to say I still possess, having given it a place of honor on my bookshelves. The excellent PBS series American Masters recently repeated their program about this fascinating figure.

Just as actual turkey meat isn’t really that tasty, the actual wild turkey (meleagris gallopavo, FYI) isn’t nearly as handsome as Audubon’s rendering has led one to imagine. I’ve had a number of up-close-and-personal encounters with these fellows, as they were always visiting near the picture windows of my mother’s last place of residence. They’re pretty bold and, regrettably, surprisingly ugly. They certainly don’t appear to be an endangered species, though they should be protected anyway, if only because of their sheer American-ness, second only, perhaps, to the beloved bald eagle.