An October Afternoon in DUMBO 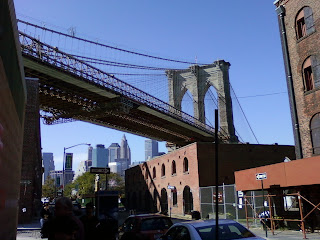 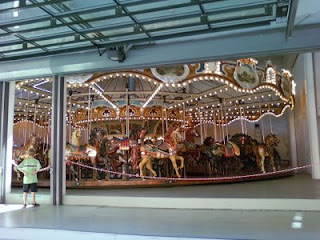 It's been a year or so since I visited DUMBO—one of our numerous city acronyms, this one for for "Down Under the Manhattan Bridge Overpass"—in Brooklyn to see the work of artists living and working there. They open their studios, concentrated in this formerly industrial area, to visitors. As a nearly lifelong New Yorker, I am ashamed to say that visits to Brooklyn have been sparse and mostly confined to attending performances at BAM, the Brooklyn Academy of Music, that hosts many of the world's great performing arts groups. DUMBO was a revelation, combining Greenwich Village–like conviviality and charm with marvelous water views and vistas of Manhattan. And there's the gorgeous Brooklyn Bridge, too. Like many beauties, this bridge doesn't have a bad angle, as this quickly taken camera-phone shot from Water Street, in front of St. Ann's Warehouse, attests.
My purpose in visiting DUMBO this time was to see a performance of the much-admired National Theatre of Scotland production of Black Watch, and this totally original piece of theater certainly lived up to its reputation. Here's Ben Brantley's reprise of his review from last year, when they first brought the show to Brooklyn:
Theater Review - 'Black Watch' - From National Theater of Scotland, a Unit Back From War but Without Peace, Returning to St. Ann’s Warehouse - NYTimes.com
In ‘Black Watch,’ a Band of Brothers With Camaraderie Forged on the Boards - NYTimes.com
So, Black Watch was a thrill, but I also encountered, inadvertently, a bonus. Practically next door to St. Ann's Warehouse is Jane's Carousel, also pictured above, which is a treat indeed. You can't ride on it, only look at it, but this is quite enough for me, as readers—if there are any—of this blog note that I love the Bryant Park carousel as well but am too embarrassed actually to get on it. More info about Jane's Carousel, which was also featured on CBS Sunday Morning, can be found on its own Web site:
(- JANE'S CAROUSEL -)
Make sure to click on "About Us" on the site in order to see other great shots (better than mine) of the carousel. Now I have to see how the one in Central Park is looking these days. I hope it's still in operation and that they still have that good, old-fashioned merry-go-round music.
Update: It is still in operation, and they have music from the original Wurlitzer! Must check in while the weather is still nice!

Hearing Air(s) at the Opera 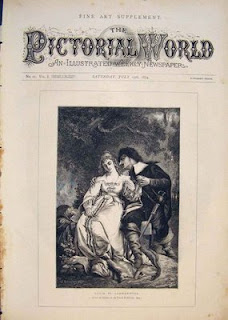 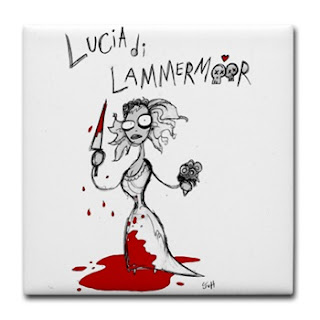 Last night's Metropolitan Opera performance of that lovely old chestnut, Donizetti's wonderful Lucia di Lammermoor, was a revelation. I thought I'd heard enough performances of Mad Lucy by most of the major interpreters of the 20th century to last the rest of my life, but I was wrong. The incredibly talented young German soprano Diana Damrau had absolutely everything in the role: vocal beauty and accuracy spiced with expressive variety, theater-worthy acting ability, grace, and personal charisma. She was ably seconded by the fine Polish tenor Piotr Beczala who, unlike most Edgardos, received almost equal kudos after the Tomb Scene. And people stayed around after the Mad Scene to hear him, too! We were given a bonus view of Lucia herself, as, in Mary Zimmerman's extremely creative Victorian-style production, her ghost appears to embrace the dying Edgardo. Bravi tutti!
An otherwise nearly perfect evening at the opera (where everything is almost as beautiful as at the ballet) poses a question worthy of Randy Cohen, who writes "The Ethicist" column in the Sunday New York Times Magazine: What do you do about an elderly gentleman sitting behind you who is apparently wearing some kind of breathing apparatus (not visible) that makes a steady hissing on-and-off sound during the entire evening? You can't ask the old guy to stop breathing, can you? Does such a person have the right to attend the theater at all and disturb others as much as does the ringing of cellphones or the whistling of improperly adjusted hearing aids? At least those can finally be silenced (after much effort on the part of audience members and theater staff). Well, my solution, and the solution of a neighboring couple, was to find other seats. I had to wait until after (hiss, hiss) Act I, although they, sitting on an aisle, were able to do so directly after the prelude. Lucky that there were a few empty seats (your loss, absentees!), perhaps because it was Yom Kippur eve. Some years ago a Carnegie Hall lieder recital by the great Belgian bass-baritone José Van Dam was marred by someone's whistling hearing aid. And there was no way to tell where the noise was coming from; there was no escape. I was more fortunate last evening.
I feel sorry for the poor breather and suppose he should be allowed out at public events, but maybe not at straight plays or classical music performances. What is to be done? With the advent of podcasts, DVDs, and DVRs, perhaps he can find it in his heart to stay at home. I wonder what Randy would say? But I'm not going to ask him, because his answer would probably be the same as mine.
Posted by Doris at 12:58 PM No comments: 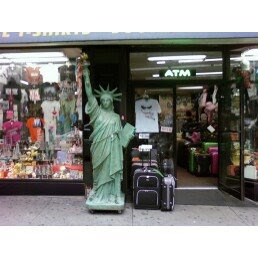 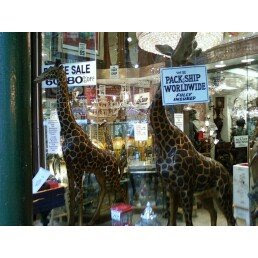 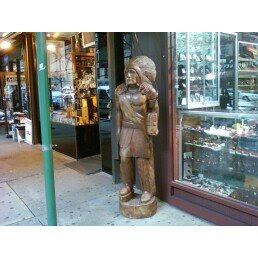 As a teenager, I had a temporary summer job selling handbags in a department store in my hometown. It always amazed me that even the ugliest bag could find a buyer. I know that one cannot legislate taste, but it was still frightening to think that anyone could find certain items attractive.  In an issue of The New Yorker, some years ago, there was a cartoon by the wonderfully wry Roz Chast that showed a shop window that was typical of some small stores around town. The displays were of the most hideous dresses and accessories imaginable, and the caption read something like, "Who shops in these places?" On my way along Seventh Avenue to experience beautiful ballet at City Center, I frequently pass tourist shops like the ones pictured here and wonder the same thing: Who buys this stuff anyway? Especially in these parlous economic times, who is going to spend money on tchotchkes? And yet they do. These places have been in business a long time. It remains to be seen if they'll stay alive in the coming months and remain an endless source of amusement, at least to me.
Posted by Doris at 8:01 PM No comments: