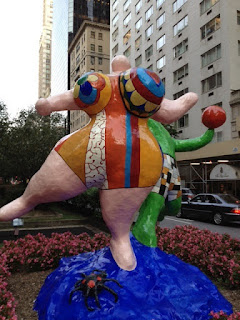 Les Baigneuses, above, a sculpture by Niki de Saint Phalle, is currently reposing on the traffic island at 57th Street and Park Avenue. It's one of the reasons why a stroll up or down Park can be so pleasant. Other reasons that walking on Park can be a good experience include much wider sidewalks and some really high-end shops. (O.K., there's a Staples too, and, farther up, a Duane Reade among other interlopers.) The sculptures displayed on Park over the past few years have included the giant roses, which I commented on a while back, and even some Boteros, favorites of mine. Those giant plastic or acrylic or whatever-they-were roses looked especially nice when they had snow on them. Wonder if we'll ever see real snow in NYC again. 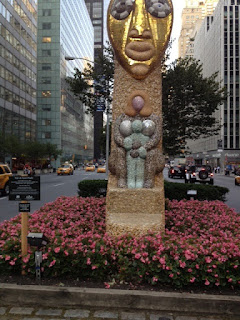 Here's another one, by Niki—a Totem to something or other. The other attraction on the traffic islands is the lovely floral display, donated by affluent civic-minded people. Right now it's miniature begonias.
And, finally, here's what's in front of the Seagram Building, one of my favorite edifices. Didn't get the artist or the title. Maybe it's more Niki. You tell me. 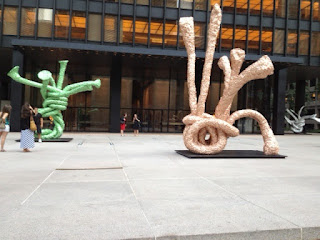 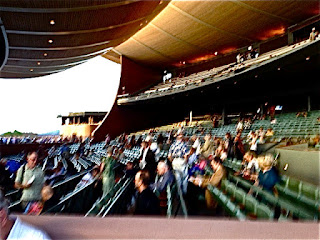 Dr. Johnson, who in his Dictionary famously defined opera as "an exotic and irrational entertainment," might still have enjoyed himself at the renowned Santa Fe Opera this (nearly) past summer. Everything there conspires to the enjoyment of the art, including the setting, as the view of the Sangre de Cristo Mountains in the background to the far left confirms. Sometimes the effects of the excellent performances are enhanced by non-musical meteorological contributions such as thunder, lightning, and winds during a battle scene in Rossini's monumental Maometto II, a rediscovered masterwork.

The well-behaved and appreciative audiences are another Santa Fe advantage. Heard no cell phones go off, and very few excessive program rustlers. It helps that the beautiful program book is on heavy, rustle-proof stock. Also, we don't have early departures rushing to catch the commuter train to Westchester dashing up the aisles or, as was the case with the final performance of Billy Budd at the Met last spring, getting out of a row, stepping on feet, and ruining the last moments of Captain Vere's moving final monologue at the very end. I'm still angry about that!

Another oft-quoted opera description is by the late Ed Gardner on his hilarious 1940s radio program Duffy's Tavern ("where da elite meet to eat"): "Opera is when a guy gets stabbed in the back and, instead of bleeding, he sings." In Tosca, of course, Scarpia gets stabbed in the chest and is only able to croak out, "Soccorso—muoio," etc. (In Santa Fe's production he was then dragged through a doorway and you could just see his feet sticking out to indicate that there was a body lying there.) On the other hand, Rodrigo in Don Carlo does fulfill Gardner's description quite well, though we wouldn't want to miss his gorgeous aria.
Posted by Doris at 5:16 AM No comments: