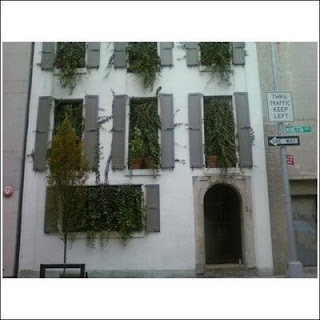 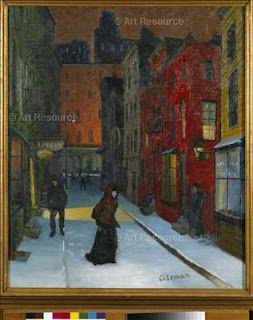 Just returned from the Minetta Lane Theater, where I saw a remarkable performance of Martha Clarke's dance-theater piece The Garden of Earthly Delights. It's based on the famed Hieronymus Bosch triptych that I've seen in Madrid at the Prado and in many reproductions, but, to me, it also had references to Dante's Inferno and the Dance of Death scene at the end of Ingmar Bergman's marvelous The Seventh Seal. At any rate, it's an hour and ten minutes well spent. Also in the show I saw a dancer I know from my own ballet class. Will congratulate her when I see her in class, not only on her performance but on her courage in taking part in a lot of Flying by Foy and aerial acrobatics. I missed this work when it was first done and am glad to have caught it at last.
I don't know if the charming Minetta Lane 1928 painting by Glenn O. Coleman (1884–1932) is the same one I remember being shown in a college class in American art many years ago. This one is now housed in the Musée de la Coöperation Franco-Américaine in Blérancourt, France. Probably many artists painted this quaint Greenwich Village street in the days when this location was full of artistic ferment of all kinds. At least there's still an active theater here. I was taken with  the white house with all the greenery, even though it doesn't have an old Village look.
Posted by Doris at 2:02 PM No comments: 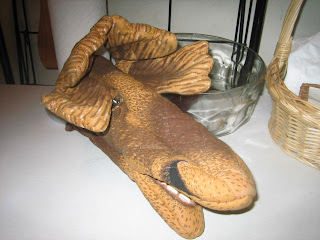 Since moose have been much in the news lately, I was reminded that I own this potholder. It was a gift that came, I think, from a family visit to the Adirondacks some years ago. I always wanted to see a live moose in the wild but have not had that pleasure. I saw a couple of them in a modest game reserve on a recent visit to Russia. I guess they couldn't see Alaska from their vantage point, though.
Posted by Doris at 5:07 AM No comments: