It's a Beautiful Day in the Neighborhood(s) 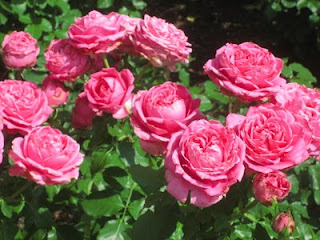 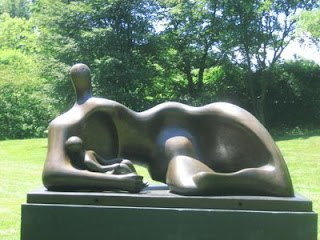 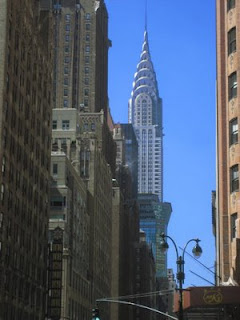 When it's a nice day in New York City, it's a Nice Day in New York City! Here's the fabled Chrysler Building (also immortalized once again in today's New York Times crossword puzzle) as it looked on the morning of June 25, 2008. Note the totally cloudless sky, not normally the case in NYC. As regards the building, my dentist, the unofficial mayor and biggest fan of the building, has his offices in the Tower Suite. Thus, when one sits in his chair, one usually has a sweeping view of New York Harbor, the Statue of Liberty, Ellis Island, et al. It's too bad to have to visit him on a cloudy day. I'm also fortunate not to have had any real dental problems, making visits both painless and pleasant, as a rule.
Now, what better activity on such a day than to pay a visit to the "Moore in America" display of 20 Henry Moore sculptures at the wonderful Botanical Gardens in the Bronx? Just a 20-minute ride on Metro North, and there you are. The sculpture shown above is one of the artist's renderings of a favorite theme: mother and child. The setting is absolutely perfect for large sculptures, and the art and venue enhance each other. You can read about a similar exhibition, including all of the same works and then some, held recently at England's equally magnificent Kew Gardens:
http://www.abbycronin.co.uk/pdfs/1202777470.pdf
And, of course, there are the botanical treasures to be savored. The conifer collection and, as seen above, the Rockefeller Rose Garden, are only two of the delights to be found in the Bronx. Don't agree with Ogden Nash's
The Bronx,
No thonx.
at all on this score. And then there are the lemurs, newly housed at the Bronx Zoo. Gotta see these babies! Their name, once used as the title of a PBS documentary, means "spirits of the forest."
Bronx Zoo
Posted by Doris at 5:09 AM No comments: 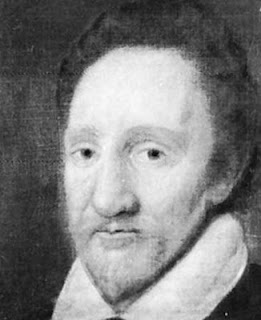 The reviews of this year's Shakespeare in the Park production of Hamlet have not been favorable. I was thinking about the many interpreters of the Dane I've seen—certainly many of the world's greats. Truly memorable were Richard Burton in the "rehearsal" production directed by John Gielgud; Ralph Fiennes a few years back; and, more recently, the beautifully voiced and profoundly artistic work of Simon Russell Beale. Mr. Russell Beale overcame his unlikely physique, drawing in and moving the audience at Britain's Royal National Theatre as much as if not more than any Hollywood-handsome type could. Although—I certainly enjoyed seeing the marvelous-looking Mr. Fiennes—those eyes!—who also has the talent and voice for the part. And no one is better at sheer vulnerability than he is.
So, I was hoping that the latest outing might be worth a visit, though I'm really not up for standing in line for anything. There are too many great presentations in NYC for which you don't have to queue up. This year, the Public Theater is offering an online lottery for some of the tickets, and I thought it might be fun to register and try to get a pair, but now I'm not sure I want to bother. I guess my favorite curmudgeon, John Simon, has warned me off:
John Simon Bloomberg Hamlet
I've been to other Shakespeare in the Park Hamlets over the years. Quite a number of years back, Stacy Keach essayed the part. I don't remember too much about his performance, but at one time I remember he was quite a respected classicist before his British drug bust and apparent fall from grace. At any rate, what I liked most about the performance was the enjoyment conveyed by two giggly teenage girls sitting behind me. They proved the real purpose of Shakespeare or any other fine theater, when one burst out at the end of an act: "I can't wait to see what happens!"
I was also reminded of Howard Dietz's wonderfully clever lyrics to Arthur Schwartz's delightful melody "That's Entertainment" from the movie version of their show The Band Wagon. The magazine Time Out New York quoted it without attribution last week when listing the current production. And then, just by chance, last Sunday afternoon Schwartz's son, Jonathan, the doyen of the Great American Song Book, played Judy Garland's wonderful rendition on his weekend public and satellite radio show. What a voice! What diction!
"When a ghost and a prince meet/And everyone ends in mincemeat."
Posted by Doris at 6:47 PM No comments: