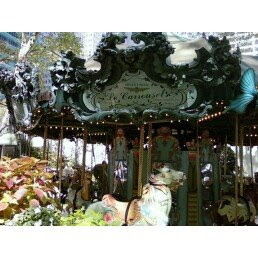 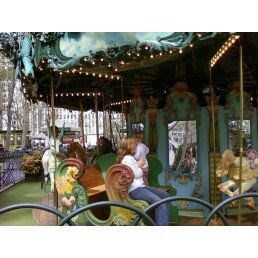 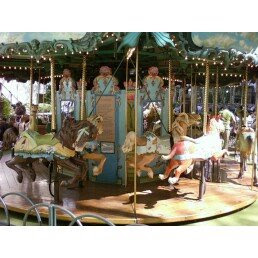 A touch of Paris can be found in Bryant Park behind the Public Library. I suppose there was a touch of Paris anyway over the past couple of weeks because it was Fashion Week, and there were tents and runway shows galore obscuring the attractions of this charming space and depriving happy lunch goers of room to open their brown bags and log on to wi-fi with their laptops or iPods. Anyway, since they installed the carousel in 2005, I have been a happier person, even though I'm too self-conscious actually to ride on it myself. I'm especially delighted that "Le Carrousel," as its sign proudly proclaims, was built in Brooklyn, also on the sign. It's quite captivating to see "Le Carrousel—Brooklyn, New York."
Was going to be a Lady Who Lunches with a couple of friends today at nearby Lord & Taylor and had some time to kill, so I sat near Le Carrousel and listened to the music, which, while I was there, consisted of something by Kurt Weill (I think) and then some French chansons aimed at children. It's just a small-size carousel, but utterly charming, even if the horses are of fiberglass instead of wood.
Posted by Doris at 6:22 PM No comments: