Some of Us Still Know "Who He" 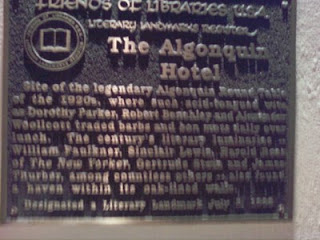 Attended a dance film event last evening in a beautiful building across the street from the fabled Algonquin Hotel, of Round Table fame. It’s nice that there’s a commemorative plaque on the hotel façade memorializing Parker, Benchley, Woollcott, et al. And the building where my optometrist is located, one block north, has its own plaque, letting passers-by know that it is the former home of The New Yorker’s original offices. Thus it was just a short walk (or stagger) from the magazine to the writers’ favorite hangout. It makes one muse on 1) whether or not anyone reads these plaques anymore and 2) how many are left who either remember or at least know about Harold Ross and/or the Algonquin Round Table. I still like to write the Rossian “Who he?” in margins when I get the chance. Most people won’t “get it” anymore, but I do it for my own satisfaction.