Stay 'Way From My Seat! 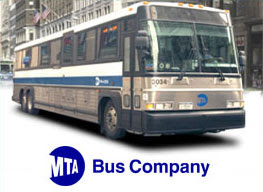 Where Thin People Roam, and Sometimes Even Eat - NYTimes.com
Whenever some irritating factor of life in New York gets to me, I always give myself the advice: “If you want to live in the Big City and enjoy all that it has to offer, you have to put up with this!” And don’t insult minorities! Fortunately, it appears that, to some extent, political correctness is going out of style and, anyway, in this case I’m insulting a majority. The story, “Where Thin People Roam, and Sometimes Even Eat,” appearing in the Times on July 23, mentions that Manhattanites tend to be thinner than residents of other boroughs and, indeed, than in other parts of the U.S. Therefore, it may be safe to mention that being squashed by a fat person who attempts to sit next to you on one of the side-facing seats in the rear of the bus can be yet another downer in our great town. I’m always hoping that only a thin Asian teenager—they’re generally narrower than Westerners—will sit next to me, but this is not usually the case.
On a bus ride to my home on the East Side, I had one of those empty seats next to me when a well-dressed and well-groomed but extremely large man eased his more than hefty frame into the space. After making myself as narrow as possible and holding my breath, I capitulated and stood up. At the same moment, a seat next to a slim, handsome young man opened up across the aisle and I grabbed it. The (much younger) man and I happened to get off at the same stop. He commented, “I saw how uncomfortable you looked, and I was very amused. I really sympathized with you.” He was an acting student, going to class at the Neighborhood Playhouse and always observing people as fodder for his craft. We chatted while walking a couple of blocks to our respective destinations. Then he, obviously honing his technique for future use, said, “And you’re very pretty; I enjoyed our little talk.”
Even though that particular experience ended well, fat people, stay away from my seat!
Posted by Doris at 7:27 AM No comments:

Labels: NYC Transit is often the scene of varied annoyances

Turtlemania—BTW I Happen to Live in Turtle Bay 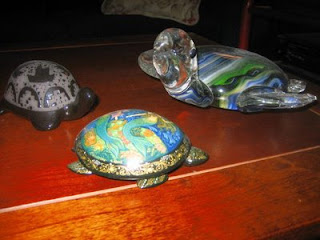 Having been fortunate enough to visit the Galápagos Islands some years ago, I've always been a fan of turtles and tortoises. I remember the huge, lumbering Galápagos tortoise, its head, legs, and tail pulled in when at rest or asleep, resembling an enormous WWII Nazi helmet. And in Costa Rica, a truly memorable event was seeing a giant sea turtle lay her eggs in the sand by moonlight. In fact, even before then, as a kid I was occasionally given those baby turtles with "Souvenir of Miami" or some such other legend cruelly painted on their shells. These poor critters never lasted long, of course. My present turtle collection consists of just these three: a hand-painted one from Russia, with mermaids, considered good luck in peasant cultures there; another from a Santa Fe pottery artist; and a third, a Chinese replica of a Murano glass design, from the Smithsonian shop. In the past, I would occasionally see box turtles along the roadside when driving in upstate New York, although I now read that these are pretty endangered and rare. A wildlife book I own states that they are frequently the victims of motorists when, like the ubiquitous—and very slow—groundhog, they try to cross a highway.
Thus, it was encouraging to read this morning that all is not lost in the turtle world. If a bunch of them can hold up flights at JFK, there's reason for hope!
Flight delays as JFK airport runway taken over by turtles!
Two favorite bits of verse by one of my heroes, Ogden Nash:
Come crown my brow with leaves of myrtle,
I know the tortoise is a turtle.
Come carve my name in stone immortal,
I know the turtoise is a tortle.
I know to my profound despair:
I bet on one to beat a hare.
And that is why I'm now a pauper,
Because of its tortly, turtly torpor.
—from The Carnival of the Animals
and
The turtle lives 'twixt plated decks
Which practically conceal its sex.
I think it clever of the turtle
In such a fix to be so fertile.
Posted by Doris at 4:14 AM No comments: 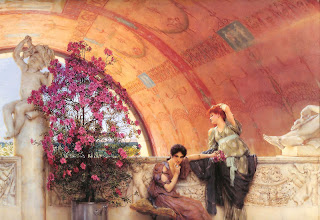 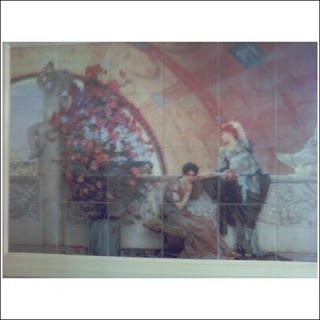 Have the decorators no shame? Never paid any attention to the other Alma-Tadema in the little entry hallway to the ladies' dressing room. Inside the dressing room is the reproduction of A Favourite Custom (1909) that I blogged about on June 11. Happened to notice Unconscious Rivals today, and here are, top, the genuine article and, below, the pale copy on tile. Would still love to know if the dance studio ownership/management know what they have here or if they just think the pictures are pretty, which they are, of course. According to not-always-reliable-but-at-least-it's-there Wikipedia, in Unconscious Rivals, in the Bristol City Museum and Art Gallery in the U.K., "Alma-Tadema's female figures have a slightly bored, pleasure-seeking attitude, as if they were pampered courtesans. There is little action in Alma-Tadema's paintings; here two women are probably just waiting for a lover. The composition is balanced by the flowers in bloom." The same lover? Perhaps a hair-pulling match between those two carefully coiffed ladies might ensue. That would add some action!
I very much doubt if the (mostly) young innocents (ha!) who pass these pictures most days even notice them, let alone know what they are. Or care. Don't get me started on air-headedness. Actually, some of them are very bright; have responsible, professional jobs; or attend good colleges. So there.
Posted by Doris at 10:42 AM No comments: