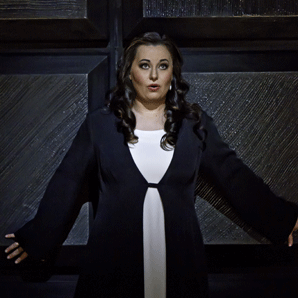 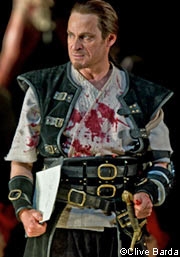 The Royal Opera has climbed aboard the HD television bandwagon pioneered by the Metropolitan Opera's highly successful seasons of live matinee transmissions to theaters around the world. This week's live ROH offering was a stunning performance of Verdi's formerly underrated Macbeth, which has come to be appreciated in recent years. Perhaps English speakers and Shakespeare enthusiasts were put off in the past by characters addressed as "Macbetto," "Macduffo," "Banco," and "Il re Duncano." ("È morto e assassinato il re Duncano!") As someone fully conversant with the original text and fairly competent in Italian, I can admire Francesco Maria Piave's adaptation for the libretto, and I even enjoy a full chorus of witches instead of the original three. There were many imaginative touches in the staging, which was never over the top. One such was the delivery of Macbeth's letter to Lady M by one of the witches, who materialized and then vanished. Their supernatural, controlling powers were made evident.
A favorite artist, the extremely versatile and physically attractive Simon Keenlyside, is able to color the music with drama and emotion despite not having a typical Verdi voice. No one seems to have a typical Verdi voice these days, but here it didn't matter. The baritone's excellent Italian was also a help. The Ukrainian soprano Lyudmila Monastyrska sang "La Lady's" fiendish music with flair, seemingly tossing off the most difficult passages. The voice is rich and free of vibrato, and she even has the requisite trill. As an actress she was less effective, but it was a pleasure to hear the music so well sung. She did go against Verdi's original idea that Lady Macbeth should make an ugly sound; her voice is an extraordinarily beautiful one.
The dark, menacing, imaginative production and the fine conducting by Antonio Pappano made this British entry into the HD sweepstakes a success.
Posted by Doris at 12:58 PM

Labels: Monastyrska as Lady Macbeth and Keenlyside as Macbeth

a quick response to the idea that there seem to be no real verdi voices around today . . . in general this is all too true, and i too lament this lack, but there is at least one singer who is absolutely the real thing, and that's sondra radvanovsky . . . the actual timbre of the voice is a bit earthy [though many like it a great deal] but in every other respect she's at least the equal of any verdi sporano since leontyne -- and i actually prepfer her to leontyne and at times even [forgive me] to zinka -- though she lacks zinka's otherworldly ppp