Trapped in a Toilet in Split!

No, not trapped in a split in a toilet, although after a lifetime of ballet training, this could probably also happen. The name of the city of Split in Croatia has 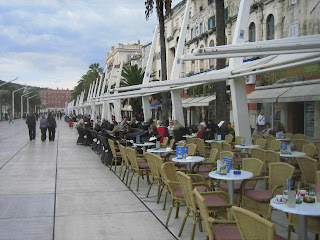 nothing to do with division or acrobatics; it comes from the name of an indigenous plant. Except for the more than impressive palace of Roman emperor Diocletian, a native of what is now Croatia, Split is not a major tourist destination. Nevertheless, it has many attractions and beauties, and its inhabitants, like their neighbors the Italians, appear to enjoy life sitting in cafés along the Riva, or seaside promenade, pictured here.
After a pizza (what else?) lunch, I availed myself of the facilities at a local restaurant, the appropriately named Adriana, for one located on the Adriatic. A long-held nightmare finally came true. When I attempted to unlock the cubicle door, it wouldn't budge. Furthermore, as it was late in the midday lunch hour, I had been the only remaining customer in the restaurant, and there seemed to be few staff on duty. And on top of that, the cubicle door was flush to both floor and ceiling! I had a cell phone that works in Europe with me, but I didn't know how to call the Split equivalents of 911, information, or the restaurant itself. Thus, I started banging on the door, crying the usual "Help!" and, in the second language of the region, Italian, "Non posso aprire!" My Croatian is, shall we say, limited to "Hvala!" (Thank you!)
Hvala came in handy, as my cries for help were shortly answered by a tall, handsome employee of the establishment, who fiddled with the door catch, opened it, and also showed me the almost invisible place where one flushed the toilet. No apparent apparatus or chain to show the way. Also, one needed to be tall to reach it! This young man was typical of the local residents in his attractive appearance and height. Almost worth my getting stuck in that embarrassing situation! He said that I was the first person to get stuck in there, but not the first person to be unable to find the toilet flush. And at least, had I found it, I'm tall enough to reach it.
Posted by Doris at 5:37 AM

Labels: View along the Riva in Split